Kulturkompis groups can free of charge visit the Tropical Greenhouse, The Linnaeus Garden and Linnaeus' Hammarby. Remember to bring your Kulturkompis card (in your phone)!

There are many guided tour you may attend in our gardens. We especialliy recommend the folliwing tours:

You are more then welcome to any of our events. Check what is on in our gardens the coming months.

Find out more about our gardens and how to get here below. Read about our open hours.

The project Kulturkompis is part of the adult educational association Bilda's work with newly arrived/asylum seekers where the assignment is to contribute to meaningfull activities that strengthens the knowledge in the Swedish language, the Swedish community and promotes participation in the social life.

The Linnaeus Garden – a haven in Uppsala

The Linnaeus Garden was the first botanical garden in Sweden founded in 1655 by Olof Rudbeck the elder. It is laid out in the French Style and restored following Linnaeus' and Carl Hårleman's design from 1745. Today approximately 1300 species are grown here. All known to have been cultivated by Linnaeus and arranged according to his own system.

Getting to the The Linnaeus Garden

The Linnaeus Garden is on Svartbäcksgatan, north of the pedestrianised part of the street.

The small estate Hammarby, 15 km SE of Uppsala, was bought by Carl Linnaeus in 1758. He wanted a farm on the countryside where he could spend the summers together with his family, away from the unhealthy quarters of Uppsala.

Today, few Swedish manor-houses preserve such an authentic milieu. It reflects the private life of Linnaeus as well as his scientific work.

Getting to Linnaeus’ Hammarby

Bus 102 from Uppsala to Knivsta stops at the turn-off for Linnaeus’ Hammarby, about 2 km from the property. The travel time from Uppsala central station is about 20 minutes, the return journey about 25 minutes. The bus departs every 30 minutes on weekdays and once an hour on weekends.

Collaboration with Uppsala-Lenna Heritage Railway and The Swedish Tramway Society

You can go by bike to Linnaeus' Hammarby. The distance is between 12 kilometers and 15 kilometers depening of your choice of route. The last 5–6 kilometers are on narrow roads with car traffic.

This route takes you southward along the river Fyrisån through the nature reserve Årike Fyris. In May, you can see the famous river meadows  at Kungsängen covered with flowering snake's head (Fritillaria meleagris). Further south, after leaving the river behind you, you reach Sävja. Carl Linnaeus used to own the heritage farm which now houses a museum, herbary, and café and holds cultural events. The remaining part of the route follows car roads. You pass the medieval Danmark church, which the Linnaeus’ family used to frequent. A narrow road, winding through the agricultural landscape, takes you the last three kilometers to the Hammarby estate. 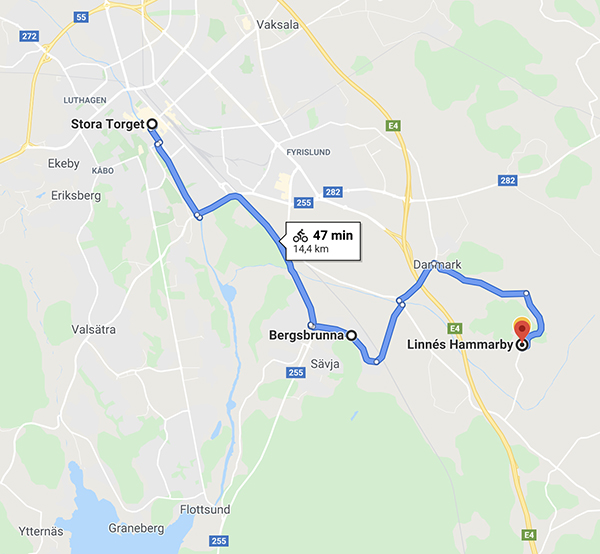 This route takes you through a green corridor to the eastern parts of Uppsala, passing Fålhagen and parts of Årsta. With some luck you will see the Lennakatten steam train working its way out of town. From Slavsta you will follow a car road to Danmark where you pass the church the Linnaeus family used to frequent. Be careful when you cross road 288 which has heavy traffic. A narrow road, winding through the agricultural landscape, takes you the last three kilometers to the Hammarby estate. 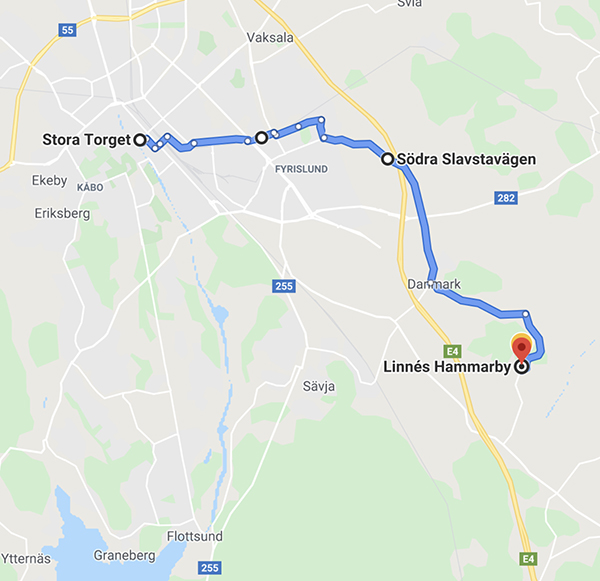 Cultural history and botany in a beautiful setting

The Botanical Garden is one of Uppsala's most popular destinations. Here, you can enjoy the grandiose Baroque Garden, visit the 200 year old Orangery with its beautiful grand halls or find inspiration for home growing among rockery plants, vegetables, summer plants and in the systemic quarters of woody plants. The Tropical Greenhouse is home to Uppsala's only rainforest!

The Botanical Garden hosts shows, art exhibitions and other events. Visit the gardens to learn, find inspiration and enjoy the richness of the plant kingdom.

The Tropical Greenhouse is home to plants originating in warmer climates than that of Sweden. Here you will find plants from deserts, rainforests, steppes and savannahs. You can stroll among orchids, lianas, palms and carnivorous plants.

There are many cultivated tropical plants in the greenhouse which are raw materials that we use daily in Sweden, though few Swedes have seen the living plant. Manila hemp is used to make teabags, oil palm to make soap and shampoo, the cocoa tree gives us chocolate and the nuts of the sacred lotus are edible (image).

One of the largest greenhouse plants is the Victoria amazonica. The smallest is the rootless duckweed, Wolffia arrhiza. One plant is no larger than this: o

Getting to Uppsala University Botanical Garden

The city buses stop directly outside the Botanic Garden at the bus stops named Blåsenhus, Evolutionsmuseet and Botaniska . Visit the website for Uppsala public transport to find the bus timetables for lines 1 (white), 2 (red), 7 (light blue), 11 (grey) and 12 (yellow).

There are car parks at Villavägen 6 (only 10 parking lots, on the side facing the Garden), Norbyvägen 18, and Plantskolegränd. Parking for the disabled is available close to the Tropical Glasshouses and Café Victoria, Villavägen 8.

Parking for coaches is available close to the Cathedral at S:t Eriks torg and Riddartorget.