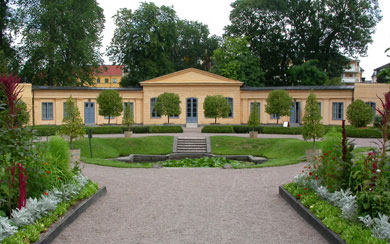 “A Winter house or hothouse, generally referred to as an Orangery, is the soul of the garden, without which no academic garden can survive.”
Carl Linnaeus Hortus Upsaliensis 1742

The orangery was built in 1744 to a plan by the architect Carl Hårleman. It was divided into three sections named after the divisions in Roman baths. Frigidarium was the coolest. Plants which spent the summer on the gravel ground in front of the orangery were kept in the Frigidarium during the winter. In the summer, it was used for lectures. Caldarium was warm and humid. Tropical plants were kept there. Tepidarium was the hot, dry department where succulents and plants from South Africa were grown.

When the botanical garden was abandoned in the early 19th century, the orangery was converted for other uses. It has not been used as a greenhouse since. There is an exhibition on the garden´s history in the southern wing.