Circa 1750, the architect Carl Hårleman was commissioned by King Adolf Frederick to draw up a new plan for the gardens of Uppsala Castle. It was then they gained the somewhat stiff yet elegant form in the strict Baroque style that remains today. Carl Hårleman's original drawing is preserved to this day in the university's collections.Within the walls of the Baroque Garden you will find many trees, shrubs, and perennials. 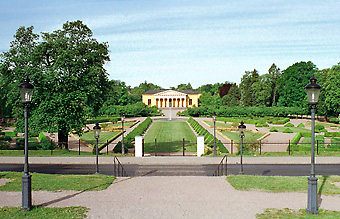 The Baroque Garden booms austerity, but behind the dense spruce hedges you will spy collections of old perennials, a rosarium and a fine assortment of peonies. One of the roundels was turned into a rockery in the 1870s and is likely the country's oldest preserved rockery. Along the 17th century wall, shade-loving plants from locations such as the forests of North America thrive.

The Baroque Garden before 1750

The Baroque Garden, designed by Carl Hårleman, replaced a planting devised a century earlier by Olof Rudbeck the Elder. Survivals from Rudbeck’s time include the northern wall and the terraces up towards the Castle.

The Baroque Garden functioned as the Castle’s garden until 1787, when Gustav III donated it to Uppsala University to be used as a botanic garden. All of the plants in the old botanic garden, the present Linnaean Garden, were moved to the new location.

Since 1935 the Baroque Garden has been protected as a site of national cultural heritage, which means that it must be preserved in its original form. A comprehensive renovation was undertaken in 1974, including the replacement of overgrown spruce trees with new topiary-clipped specimens, grown from cuttings taken from the original 18th century trees.