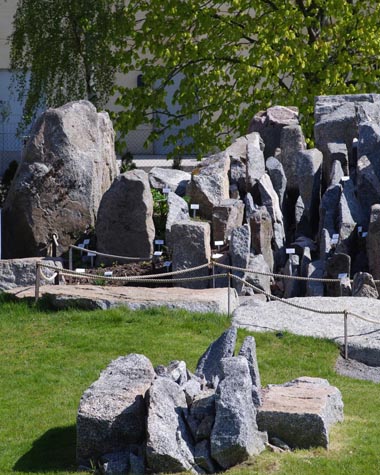 The Scandes, the Scandinavian mountain range, the divide between Norway and Sweden, traces its origin back to pre-atlantic times, but has been considerably molded and modified since. The highest peak is Galdöpiggen at 2469 m. Because of the northerly location of the Scandes, the forest line is much lower than in e.g. the alps, from close to 1000 meters in South Norway, to almost sea level in the North. 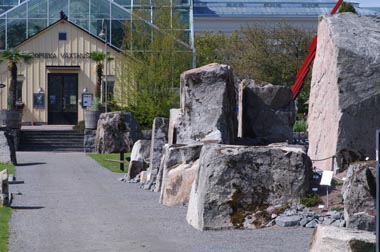 The floral composition of the vegetation depends on altitude, exposition to wind, snow-cover, water and to a large extent on the mineral soil. To illustrate this, the Scandianavian mountain in the Botanic Garden consists of three islands. One island contains plants from calcium-rich ground and one is planted with plants preferring acid soils. The third island is more mixed, housing those species that need more water, deeper soils or have other special preferences.

The rocks are "Uppsala granite" (tonalit) and the largest has the impressive weight of 55 tonnes. The filling in the crevices is sand and gravel (the lower moraine fraction from 0 to 8 mm) which gives a well drained flexible bed for cultivation, but requires regular watering, especially in spring.

The architect behind the alpine garden is Mats Lindegren, who also constructed the facing "Tree of Knowledge” (phylogeny of angiosperms) which shows the evolutionary relationships of extant flowering plants.

The garden showing Scandinavian alpine plants opened in May 2014.
See some photos from the construction of the alpine garden.