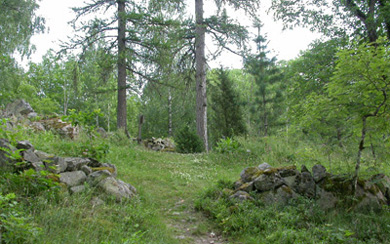 On the rocky slope leading to the natural history museum, an open site has been cleared. This is what remains of the Siberian Garden, or Hortus Sibiricus, which Linnaeus had laid out to accommodate a large consignment of Siberian seeds that he received in 1773 from the Russian Empress Catherine II.

Linnaeus was keen to introduce new plants, useful and ornamental, that could cope with the Swedish climate. Consequently, he was particularly interested in species from North America and Siberia. A similar ‘Siberia’ was created in the Botanical Garden in Uppsala. Having plants growing in two places was practical for the ageing Linnaeus, as it meant that he always had them close at hand. We do not know what species were grown in the Siberian Garden, but they probably included hen-and-chickens houseleek Sempervivum globiferum and rock cinquefoil Drymocallis rupestris, both of which are found in the area to this day.