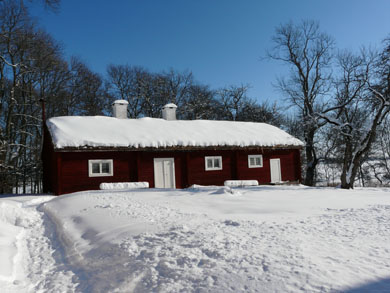 The detached east wing is roofed with turf, as it probably was in the 18th century. In 1753 Linnaeus described how the roofs of houses in Uppsala were covered with green turf. Roofs of this kind supported a special flora, made up of plants tolerant of poor, dry habitats: drooping brome Bromus tectorum, orpine Sedum telephium, biting stonecrop Sedum acre, narrow-leaved hawksbeard Crepis tectorum and star (or twisted) moss Tortula ruralis. Linnaeus gave several of them the name tectorum, from the Latin tectum meaning ‘roof’.

In the province of Småland where he grew up, Linnaeus had seen peasants planting common houseleek Sempervivum tectorum on their turf roofs to protect their cottages from fire. Around Hammarby another species is found, hen-and-chickens houseleek Jovibarba globifera, which has spread from Linnaeus’ gardens. He may also have planted it on the turf roofs of the simpler buildings here.

In Linnaeus’ time, the east wing served as a brewhouse and bakery