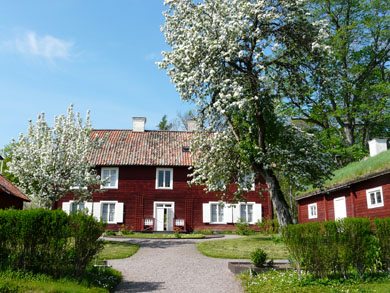 In the open courtyard in front of the main house is a Siberian crab apple Malus baccata that has been growing here since the 1760s. When it blooms at the end of May, this aged tree is an impressive sight, draped in large white flowers. The apples are very small, however, and Linnaeus and his son recommended the species primarily for hedges and as grafting stock.

Linnaeus was probably given seeds of Malus baccata by the Finnish natural historian Erik Laxman, who served as a clergyman in Siberia around 1765. There were originally two trees of the same age here, but one of them fell in 1850 and has since been replaced with a graft from the surviving tree. Linnaeus seems to have taken quite a liking to the Siberian crab apple, and also used it for hedges in his garden. Remains of them could still be seen in the 1830s