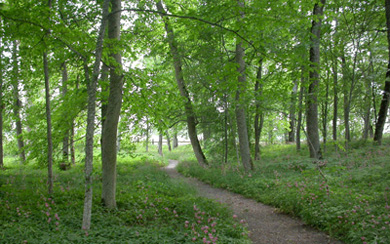 ‘Keep alive in your own day
the grove that I have planted,
and if any trees be lost, plant others in their place.’

This request by Linnaeus to his wife Sara Lisa is quoted from a list of things he asked her to take care of after his death. The grove he was referring to was probably this area by the road to Hubby. There is believed to have been a square arbour of trees here, known to his grandchildren as ‘Grandpa’s leafy bower’. A quiet spot where Linnaeus liked to sit and smoke his pipe, and where dinner would be served when the weather permitted.

According to family tradition, Linnaeus’ four daughters each had a ‘plum grove’ at Hammarby. In the now overgrown garden, vestiges of Linnaeus’ orchard can still be seen, including plum Prunus domestica, dwarf cherry P. cerasus and gooseberry Ribes uva-crispa.