Linnaeus as a priest of nature

”Linnaea” by Per Daniel Amadeus Atterbom 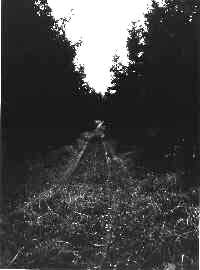 The dark trees shudder
From the gray mountain’s hat;
Silently asking sprites and elves,
If the heat does stifle still.
And coolness conjures them out
And through the woods there passes
A light and clear divine thought,
In the Nordic summer’s night.
Oh, tall conifer forest! Dreadful
To many is your sandy heath;
To me you are only lovely,
A home of unbroken peace.
Does this time belong to the night?
To me it seems, on all the water’s
Pleasure waves, rays form
Another airy bridge.

That is how the poem “Linnaea” (“Twinflower”) begins. It is one of eleven poems Atterbom published in his own journal Poetic Calendar in 1812. (Other flowers given a chance to express themselves are the sunflower and the butterfly orchid). The background to this poem is that Atterbom and a couple of other young men—the Romantics—had reacted strongly against the typical 18th-century manner of writing poetry. They felt it was all too stiff and colorless and that it also did not do justice to life itself.

“Linnaea” is an atmospheric poem that takes place in a dark pine and spruce forest in the night. And it is nature herself who speaks through one of her flowers. The Romantics had grown tired of the 18th century’s talk about light and utility, wishing instead to celebrate darkness and exciting things. The Linnaea is a flower that thrives precisely in dark conifer forests, and by choosing it as the voice of the poem, Atterbom claims the support of nature for such thoughts. “Oh, tall conifer forest! Dreadful to many is your sandy heath; To me you are only lovely, A home of unbroken peace.”

Reality has a soul, according to the Romantics, and the duty of the poet was to describe the world soul as it manifests itself in nature. There are symbols there for how everything is permeated by something living and how everything is one. It is not enough, therefore, simply to look at nature and describe it—nature must be interpreted.

To Atterbom, Linnaeus was not a natural scientist who observed nature, but indeed a priest of nature who interpreted it and understood it. And the linnaea flower still perceives his presence in the forest:

What hovers over the woods,
With the song-thrushes final call?
A venerable shadow, faithful
To the pleasures of his former home;
The seer who read me
And adorned me with his name;
The priest of nature with his pious
And happy countenance!

Atterbom has Linnaeus support the idea that the world of human beings has become unfeeling. The linnaea continues to speak:

The author Per Daniel Amadeus Atterbom

It is said of Per Daniel Amadeus Atterbom (1790–1855) that as a little boy he would sit quietly reading or writing. When he was eight he had written a novel titled Alphonsus and Marina, A Tale Made by Me. When he was ten he had learnt German from his parents’ books. And of course he had read many other things, not comic books exactly, but more or less difficult philosophic texts. We can assume that he didn’t have very many peers to talk to about what he read, but in 1805—when he was fifteen—he began his studies at Uppsala, and there he found like-minded friends. Together they formed a society that they called the Aurora Association.

The name tells us somethong about what the young men intended their society to be. Aurora is the name of the goddess of the sunrise in Roman mythology. Her duty is to open the eastern gates every morning with rosy fingers so the chariot of the sun can get through. The young men no doubt chose this name because they saw themselves as the ones who would open the gates for the sun. And to them the sun was beautiful and living poetry.

The 18th century’s normal way of writing was moralizing and lifeless, they felt. It was a waste of poetry, which was a spiritual primeval force and which, if it was good enough, could even transform life. A good poem, according to Atterbom and his friends, expresses feelings and moods and contains many colors and images. It should preferably be about the soul and nature and how nature and the human soul go together.

There was a strident and protracted debate about how you should write. Atterbom and his like-minded friends were on one side, and representatives of the old style were on the other. Atterbom both published his own journals and contributed to others.