Few things fascinated Swedes in the Age of Liberty as much nature. This interest in nature made it the highest fashion to collect objects from the three kingdoms of nature: animals, plants, and minerals. These collections were called specimen cabinets and originated in the courts of princes but spread to the aristocracy and bourgeoisie.

Linnaeus and the other naturalists were among the most diligent collectors. The Royal Academy of Sciences was quick to establish a major collection of specimens, and it was constantly augmented by donations and wills. These collections eventually became the basis for the National Museum of Natural History in Stockholm. Another major specimen collector was Linnaeus’ friend, the Hat Party politician Carl Gustaf Tessin.

However, the largest collections were assembled by the then crown prince couple Adolf Frederick and Lovisa Ulrika, starting in the mid 1740s. Adolf Frederick’s specimen cabinet at Ulriksdal Palace comprised fish, skeletons, and worms in alcohol, for example. Lovisa Ulrika’s collection, which contained butterflies, shells, and mussels, was kept at Drottningholm Palace, where a special natural specimen chamber was constructed in the 1760s. 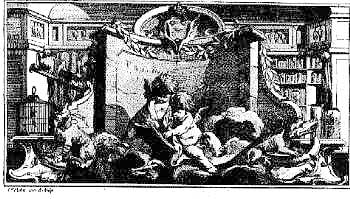 In the middle of the 18th century, when the royal couple wished to have their collections described scientifically, it was only natural to call in Linnaeus. Starting in 1751, Linnaeus spent a great deal of time at Ulriksdal and Drottningholm studying the royal collections. In 1754 he published a description of Adolf Frederick’s collection, and he develops his physicotheological ideas in the foreword. Ten years later (1764) Linnaeus published his inventory of the queen’s collection. Eventually the royal couple’s collections were merged, and in the early 19th century they were shared between Uppsala University and the Royal Academy of Sciences.