Two professors at the beginning of the century

Harald Vallerius (to the left in the picture) knew Newton's theories early. Newton's name is mentioned in the dissertation Theorema de Matheseos Incrementis (a theorem on the development of mathematics), written in 1694, probably by Harald Vallerius. The dissertation describes the different parts of mathematics with a name cavalcade of its practitioners. In 1710 he was involved in starting the first scientific society in Sweden, Collegium Curiosorum (society of the curious). He was avidly interested in music, and in 1697 he completed a new edition of the hymnal together with Olof Rudbeck, Sr. He was succeeded as professor by his son Johann in 1712.

Per Elvius (to the right in the picture) was a popular lecturer, perhaps because he lectured in Swedish, not Latin, which was the norm. He also had a good collection of books: for example, he was one of the first in Sweden to own a copy of Newton's Principia. Anders Gabriel Duhre had Elvius as a teacher and left a fine testimonial to him:

”Mr. Professor Elvius, who, being so occupied by the duties of his office that he did not have time to explain to me his good will with such persistent information as he would have wished, not only always loaned me his best mathematical books, informing me of the method with which to read them speedily and fruitfully, but also, each time I returned to him the same borrowed books, did not spare any effort to examine to what extent I understood what was most remarkable in them.”

On page 5 Newton's ”Primarum&Ultimarum rationum” (the first and final ratio; a kind of limit) is mentioned. This is the name of the first chapter of Principia. On pages 3 and 4 of the dissertation, we find a proof that the new mathematics is clearer and superior to the old. It is odd that the proof is classical, based on axioms and definitions.

Collegium Curiosorum was founded in the Gustavianum building during the plague year of 1710, when the University was shut down. The initiative came from the University librarian, Eric Benzelius, Jr. Besides Harald Vallerius, his sons Johann and Göran took part, as did professors Johan Upmark, Per Elvius, Olof Rudbeck, Jr., and Lars Roberg. They exchanged letters with Christopher Polhammar (after his ennoblement in 1716, Polhem) and Emanuel Swedberg (after his ennoblement in 1719, Swedenborg). The meetings ceased in 1711, but the society was succeeded by the Bokwettsgillet (Society of Book Knowledge) in 1719, the Royal Society of Science in 1728, and the Royal Swedish Academy of Sciences in 1739. 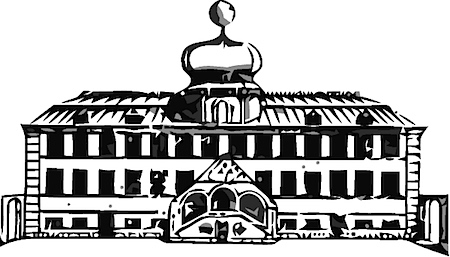 The University building Gustavianum contained, besides classrooms, a library, a print shop, and student housing. Under the cupola lay the famous anatomical theater erected by Olof Rudbeck, Sr., in the 1660s. Gustavianum became the main building of the University in 1778 after Academia Carolina was torn down.