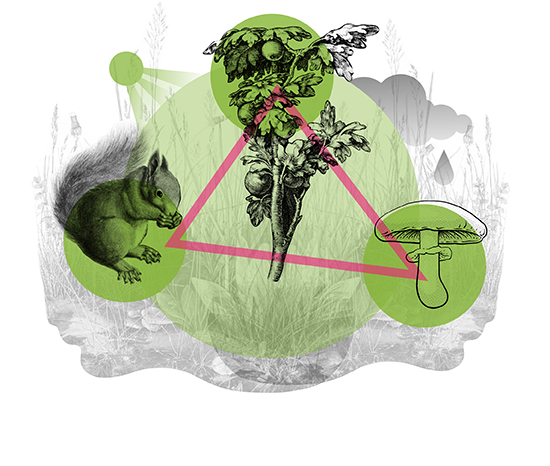 Ecology developed as a science in the 19th century, but many ideas were already present in the writing of Linnaeus. Author Håkan Rydin

The concept of ecology did not exist in Linnaeus's  time. But it is clear that much of his thoughts and writings contain ideas that today fall within ecology. Linnaeus himself used the term economy of nature.

Ecology can be defined as the study of organisms' interactions with each other and with the environment, and Linnaeus made many observations that fit well into today's division into population ecology, community ecology, and ecosystem ecology. Linnaeus also dealt with biogeography – the distribution of plants, animals and vegetation types. Today we have evolutionary explanations for many ecological processes, but for Linnaeus all relationships in nature are the result of the will of the Creator – not least clearly when Linnaeus deals in a philosophical way with the equilibrium in nature.

Linnaeus and the ecological ideas

According to Stauffer (1960), the ideas of Linnaeus were important for the development of ecology as they were picked up primarily by the geologist Charles Lyell and further on by Charles Darwin. The term ecology was coined in 1866 by the German zoologist Ernst Haeckel who merged Linnaeus' thoughts on the economy of nature with Darwin's evolutionary biology.

In today's ecology, we try to understand patterns and processes at different hierarchical levels:

Linnaeus describes three phases for plants and animals: propagation, preservation and destruction (generatio, conservatio, destructio). We may think of Linnaeus as someone who primarily classifies and describes, but here he makes a process-oriented division that overlaps with (but is not identical to) the division into population, community and ecosystem processes in the table above.

In his travelogues, Linnaeus excels with his eye for detail, but also for his ability to make comparative observations. Even today, all ecological research begins with observations of patterns that are then tested with models and experiments – natural history forms the basis of descriptive ecology. What then were Linnaeus' observations and conclusions that have contributed to the development of ecology, and how did his view of ecological processes differ from later interpretations? The most important sources are the treatises Oratio de telluris habitabilis incremento (On the increase of the habitable earth, 1744), Oeconomia naturæ (The economy of nature, 1749) and Politia naturæ (The governance of nature, 1760).